There are two birthstones for the month of October, opal and tourmaline. The commonly agreed upon October birthstone color is red. Opal is the more common birthstone associated with the month of October. Opals are made out of submicroscopic silica spheres that are held together with water and more silica. This is a soft stone that can easily be altered in appearance using pressure and heat. The mineral has a varying amount of water that will determine what it looks like. When water evaporates out of the stone it will appear smaller and there will be cracks in it because of the evaporation process.

History of Opal and Tourmaline

Opal comes from upala, which is Sanskrit, and opalus which is Latin. These mean precious stone. The opal is a gemstone that has a lot of variety and it was once describe by Pliny, who was an ancient roman historian as being made up of glories of precious stones. It is difficult to describe as it has a gentler fire than that of the ruby combined with brilliant purple of amethyst and the greens of the emerald that sine together in union.

According to an Indian legend, the gods Vishnu, Shiva, and Brahma were competing jealously over the love of a gorgeous woman. The eternal was angered by this and changed the woman to a creature that was made of mist. The gods then endowed her with their own colors as a way to recognize her. Shiva gave his brilliant red, Vishnu enriched the woman with gold, and Brahma provided the glorious, heavenly blues. Finally, the eternal pitied the woman and then turned her into stone. This is why the opal sparkles with all of the colors.

Ancient romans believed that the opal was a symbol of hope and love. The Orientals called the opal the anchor of hope and the Arabs stated that it fell from the skies in flashes of lightning. It was believed that it would make its wearer invisible, so it became the talisman of spies and thieves.
Tourmaline

The other birthstone of the month of October is tourmaline. This is a gemstone that has a broad spectrum of colors. The quality of this mineral has been misidentified as being sapphires, rubies, and emeralds. There was a large tourmaline that belonged to Russian Empress Catherine the Great that was thought to be a ruby. 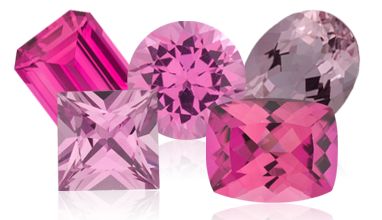 The birth flower for the month of October is the Marigold. Marigolds were discovered by the Portuguese in the 16th century in central America. They brought the flowers back to India and Europe. The marigold was thought to have magical medicinal and religious purposes by the Aztec culture. This dates back to the year 1552 when records of herbs show that marigolds were used for curing hiccups and for healing anyone that was injured by being hit by lightning. One of the magical uses of the flowers was when it was used by sailors who would carry it for safe passage over bodies of water.